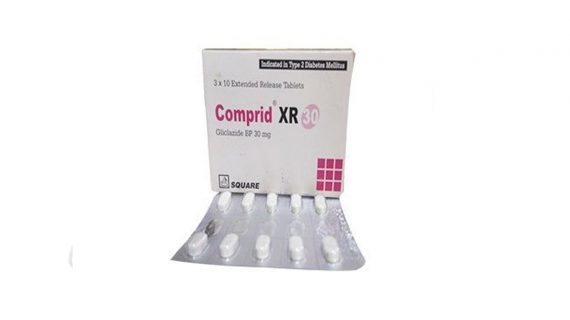 The usual initial dose of CompridTM is 40 to 80 mg daily, gradually increased, if necessary up to 320 mg daily until adequate control is achieved. A single dose should not exceed 160 mg. When higher doses are required it should be taken twice daily, according to the main meals of the day. For extended release tablet the initial recommended dose is 30 mg daily, even in elderly patients (>65 years); the daily dose may vary from 30 to 120 mg taken orally, once daily. CompridTM XR should be taken with food because there is increased risk of hypoglycemia if a meal is taken late. It is recommended that the medication be taken at breakfast time. If a dose is forgotten, the dose taken on the next day should not be increased. Dose titration should be carried out in steps of 30 mg, according to the fasting blood glucose response. Each step should last for at least two weeks. CompridTM XR is an extended release tablet and therefore, should be neither broken nor chewed. CompridTM XR 30, can replace Gliclazide 80 mg tablets, tablet for tablet, for doses of 1 to 4 tablets per day. Elderly: Plasma clearance of Gliclazide is not altered in the elderly and steady state plasma levels are similar to those in adults under 65 years. Clinical experience in the elderly shows that it is effective and well tolerated. Children: Gliclazide as with other sulfonylureas is not indicated for the treatment of juvenile onset diabetes mellitus.

Care should be exercised with patients having hepatic and or renal impairment and a small starting dose should be used with careful patient monitoring. In long term clinical trials, patients with renal insufficiency have been treated satisfactorily using Gliclazide at reduced doses.

Hypoglycemia may occur in concurrent conditions such as hepatic & renal diseases, alcohol intoxication and adrenal and pituitary insufficiency. Mild gastro-intestinal disturbances including nausea, dyspepsia, diarrhea, and constipation have been reported but these types of adverse reactions can be avoided if Gliclazide is taken during a meal. Allergic dermatological reactions including rash, pruritus, erythema, bullous eruption have been reported during treatment with the drug but are not known to be directly attributable to it. More serious reactions like leucopenia, thrombocytopenia, agranulocytosis, pancytopenia, hemolytic anemia, cholestatic jaundice, GI hemorrhage have not been reported with Gliclazide.

Gliclazide should not be used in juvenile onset diabetes, diabetes complicated by ketosis and acidosis, diabetes undergoing surgery, after severe trauma or during infections, patients known to have hypersensitivity to other sulfonylureas and related drugs, diabetic pre-coma & coma, severe renal or hepatic insufficiency, combination with miconazole tablets.

USE IN PREGNANCY & LACTATION Pregnancy:

Gliclazide should not be used in pregnancy. Nursing mothers: No study has reported its presence in human breast milk. However, other sulfonylureas have been found in milk and there is no evidence to suggest that gliclazide differs from the group in this respect.

Keep away from light and store at cool and dry place.

There are no reviews yet.

Only logged in customers who have purchased this product may leave a review.

You've just added this product to the cart: